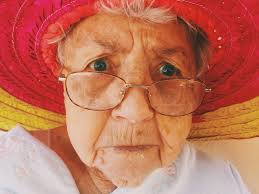 Big mother is watching. This is the premise of Abuelita, Mexico’s newest surveillance app that harnesses the country’s vital abuela supply.

In a nation dogged by security concerns and craving for more secure homes, Abuelita allows users to remain constantly vigilant by ensuring their property is monitored regularly by their neighbourhood abuelas that are frequently and constantly alert on their porch or balcony.

“Mexico City has one of the highest ratio of abuelas per neighbourhood in Latin America,” said Abuelita CFO Estefanía Mirando, “Our app was a big win for marrying Big Data with surveillance tech.”

By isolating which abuelas are within a local neighbourhood, the app allows users to “hook-up” with their local abuela who can keep an eye on their house for while they’re away.  The service also includes cybersecurity measures, provided your abuela can figure out how Skype works.

“It’s a great service for when everyone in the house has a job and has to leave the house alone during the day,” said one user of the platform, “we used to have a security watchman, but this is much better.”

In addition to monitoring those entering and exiting a given building, with a small additional charge, abuelas can also access your home in an emergency and allow friends and loved ones in without a key.

“I love the chance to make sure Irina’s safe,” one abuela named Anamaria told us, adding that “It also gives me a chance to leave her some leftover lasagna.”

The idea for Abuelita was provided by Will Ryan of Publicize.

Non-starters is our space to dedicate to terrible startup ideas. If you have an idea for a terrible startup (or work at one), please send your thoughts to editor@latam.tech. Please note that any resemblances between Abuelita and an existing startup are purely coincidental.